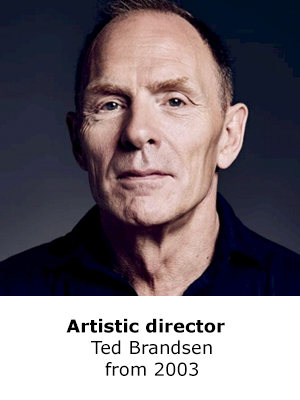 Under the directorship of Ted Brandsen (1959, Kortenhoef, the Netherlands) the Dutch National Ballet has made enormous progress. In 2013, for instance, the New York Times ranked the company in the top five dance institutions in the world that presented new productions, and De Süddeutsche Zeitung ranked the group in the top three in the world. As the director of Dutch National Ballet, Ted Brandsen has introduced and developed a number of important artistic initiatives. These include taking an innovative look at the full-length repertoire, presenting leading repertoires more widely throughout the Netherlands and introducing new world-class choreographers. In collaboration with the National Ballet Academy, he initiated a closer link between the dance academy and professional practice, and was involved in founding the Junior Company. In his view, Dutch National Ballet should not confine itself to devotedly reproducing existing productions, however successful these may be. Brandsen feels it is necessary to take a fresh look at the classics and believes that new impulses are vital.

Choreographer
Ted Brandsen took his first steps as a choreographer in 1985, in Dutch National Ballet’s annual choreographic workshop. In the years that followed, he created works for various companies in the Netherlands. He also created work for the Amsterdam Fund for the Arts, the CaDance Festival and the Holland Dance Festival in The Hague, and the NOS television broadcasting company. In 1992, he made Four Sections, followed by Crossing the Border (1993), Blue Field(1995) and Bach Moves (1995). As the artistic director of West Australian Ballet, he created many works, including Carmen (2000), for which he received the Australian Dance Award for Choreography, and Pulcinella (2001). A number of his successful ‘Australian’ ballets were also added to Dutch National Ballet’s repertoire on his return to Amsterdam. Since then, Brandsen’s creations have included Light Journey (2002), Body (2004), Firebird (2004), Stealing Time(2006) and Hallelujah Junction (2007). In February 2008, he presented his own version of the full-length ballet Coppelia and choreographed In Between for the programme In Space. In 2010, he created Duo and in 2011, he choreographed Raï for the programme Present/s. In 2013, he created Verge for students of the National Ballet Academy/Amsterdam School of the Arts and in 2014 Replay in the touring programme Stars of Dutch National Ballet. Brandsen’s works are included in the repertoire of many companies around the world.