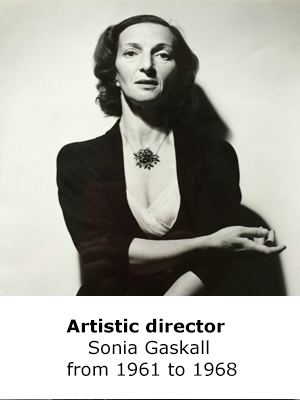 The Dutch Connection:
The National Ballet had been set up in 1961

This was a merger of all other companies. When the fusion took place and the companies The Amsterdam Ballet with former director Marcha ter Weeme  intigrated with The Netherlands Ballet under artistic direction of Sonia Gaskell, both directors were condemned to each other. Marscha ter Weeme was forced to work together with Sonia Gaskell, they both became artistic co directors for the new formed Dutch National Ballet in 1961. But after a short period Marscha ter Weeme left her position as artistic director, because both personalities couldn´t work together, they both had conflicting ideas about artistic points of interest. Finely Sonia Gaskell guided the new company by herself. In 1965 Rudi van Dantzig and Robert Keasen, both choreographers, were appointed as artistic advisers for indefinite period of time, to support Sonia Gaskell with her artistic decisions for the company. For both advisers there was no job description available as a result of some mismanagement of Sonia Gaskell. This fact created many uncomfortable situations between Gaskell, van Dantzig and Keasen. When Sonia Gaskell left The Dutch National Ballet in 1968 van Dantzig and Keasen were appointed as co artistic directors. Unfortunately Keasen decided in 1970 to step down of his post as co director, he motivated his decision that he wasn´t able to do his artistic job properly.

Apart from the classical repertoire and the ‘modern classics’ ( where Balanchine occupied a special position) , within the period 1961 – 1972 it was the work of Rudi van Dantzig which moulded the shape of The National Ballet. A great deal of the succes of The National Ballet after 1972 where the works of Hans van Manen and Toer van Schayk shaped the company even further. In 1968 van Dantzig succeeded Sonia Gaskell as artistic director. The Netherlands Dance Theater with artistic director, choreographers Benjamin Harkavy and Hans van Manen formed the counterpart to this, becoming an exponent of the cultural innovations in the Netherlands in the second half of the 1960’s. The Dutch National Ballet in Holland became the fore runner in Europe and abroad to show the audiences all over the world that a classical based company could dance the modern & contemporary choreographies of their time. We speak here about 1961-1971. Gaskell invited prominent choreographers and teachers to the company including: Harold Lander, David Lichine, Leonid Massine, George Skibine, Serge Lifar, Maurice Béjart, Abdarakhman Kumusnikov famous teacher from Leningrad, Igor Belski Leningrad, Nathalia Orlovskaya Moscow, Jelena Chikvaidsze Moscow, Pearl Lang soloist from the “Martha Graham Company” they gave training in classical and modern techniques. John Taras an American Ballet master from the New York City Ballet, who laid the foundation for the Balanchine repertoire. Sonia Gaskell was not concerned with tradition alone: new developments were also exceptionally of importance. Besides Balanchine’s “pure” dance form, this was one of the new developments of the fifties and sixties. Few people are aware that one of the very first forms of post-modern dance was staged and choreographed by Paul Taylor for The Netherlands Ballet and commissioned by Gaskell in 1959. Taylor, at that time an unknown American choreographer in Europe became world famous. Martha Graham and first soloist Pearl Lang and her company made their first performance in the Netherlands in 1955.

The Dutch dance world was greatly impressed by these performances. Inspired by Martha Graham’s psycho dramatic dance pieces, many of today’s contemporary choreographers uses movement elements and forms integrated and fusioned in too days choreographies. The Dutch National Ballet of Holland gradually acquired international recognition and played a prominent role in bringing about synthesis of both classical and modern techniques based on Graham, Gunningham and Lémon styles. Therefore the Dutch Company became an example in the sixties through the eighties for many more companies in Europe, north and south America and elsewhere. A practical way for the professional dancer to experience different contemporary styles of training and choreographies is to become a member of a company who is able to dance the diverse styles of dancing. The present climate may be such that we have a new chance to reassess the various influences in contemporary dance and fusions with classical dance in Europe. We must discover what massage is being communicated by the living medium of dance. William Forsythe, former solist with the John Cranko Company, now an eminent important choreographer making his debut in the eighties. His contemporary developments where shown in his pieces “ARTIFACT I” and “ARTIFACT II” Forsythe’s quotation from neo-classicism. Contemporary choreographers like Jiri Kylian, Hans van Manen, Nils Christe, Rudi van Dantzig, Toer van Schayk, were the backbone and front runners from the sixties through eighties in the Netherlands and Europe. Nowadays; Forsythe, Mats Ek, Wayne Mc-Gregor, Angelin Preljocaj, Sidi Larbi Cherkaoui, Christopher Wheeldon, Benjamin Millpied, Xavier Leroy, Marco Goecke, Alexei Ratmansky and Krzysztof Pastor are the leading contemporary masters.